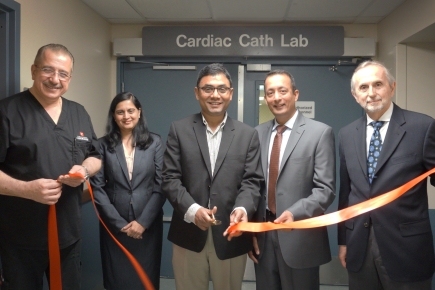 Heart disease remains the top cause of death in southeastern Michigan as well as in the state and nation. Until 2015, Michigan’s Certificate of Need laws prohibited hospitals from offering elective PCI without open heart surgery backup. Since then, regulations have changed and Garden City Hospital’s reputation for superior performance in preventing complications met the criteria to offer elective PCI—a much-needed service for patients with heart conditions.

GCH is also expanding its vascular services to include peripheral artery procedures as well as a limb preservation clinic. “The availability of expanded vascular capabilities will also complement the hospital’s wound care program,” said Saju George, CEO. Garden City Hospital is one of the few hospitals in southeastern Michigan with an advanced wound program featuring a multi-person hyperbaric chamber. It’s no wonder GCH has been designated among the top five percent of hospitals in the nation for its excellent performance in patient care.