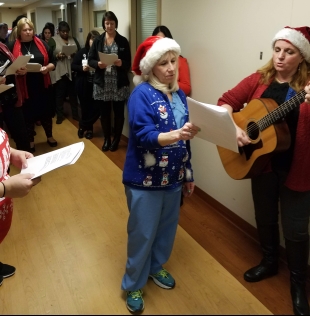 Christianity: Christmas Candle
One of the largest holidays celebrated in Christianity is Christmas. Celebrated on December 25, Christmas is a holy day that marks the birth of Jesus Christ, son of God. Each place has its own special way of celebrating Christmas and the holiday season. In Nazareth, Christmas is a special experience. Christmas trees are decorated and seen across town, Santa costumes, festivals, church services and gifts are enjoyed by all. One special tradition is the city’s Christmas Market. In the video above, Garden City Hospital staff member, Naomi, talks about a special candle that one of the local vendors offers to tourists and residents during the Christmas season.

Christianity: The Holy Land
The “Holy Land” stretches from Egypt to Syria. In Christianity, the Holy Land is where Jesus lived, proclaimed his Gospel, performed miracles, was crucified and rose from the dead. This includes the cities of Israel, Jerusalem, Nazareth and Bethlehem. According to the Gospels, Israel was where Jesus performed his miracles and was where he died. Biblical sources state that Jerusalem was where Jesus arrived shortly after his birth and was raised there, Nazareth was his childhood home and Bethlehem was where he was born.